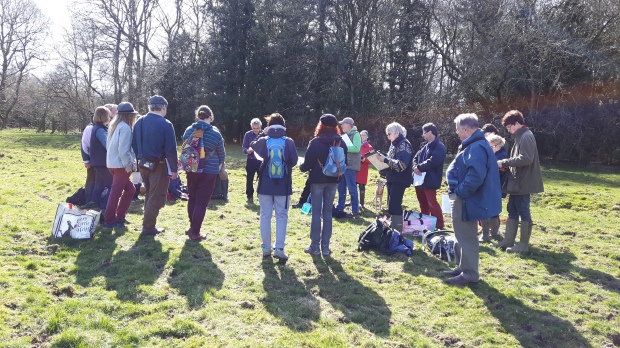 Twenty Five FoA volunteers met at Stockton Camp on a bright early spring morning. This was an introductory visit to evaluate the site, its landscape position and what is known of its history. The site is a huge one and we only explored around a third of it, finding a complex mixture of linear, rectangular and round features. The excellent Royal Commission for Historic Monuments (RCHM) survey of the site (unpublished but consultable) provided an overview of the potential for our further investigation: geophysics (to be undertaken in the summer by the University of Winchester). On-site discussions ranged from soils, and in particular the accumulation of plough soil in the valleys (washed out by early agriculture on the higher ground); the geology of the site and the proximity of water to the use of hachures as a convention to represent banks and ditches in site plans; the nature of the Romano-British finds which have so far emerged from the site and the early discovery of the site by Colt Hoare (1804), which led to the excellent first plan of the settlement by Philip Crocker.

This first visit also allowed us to appreciate the position of the site in the landscape, which it dominates – though today woodland to the South limits the views in that direction over the busy A303 which can just be heard. The visit also allowed us to ask questions about the reasons for such intense Roman-British and possibly late prehistoric activity here. We will return.  And soon! Though perhaps the hardest of our three sites to grasp initially, Stockton may turn out to be the richest in terms of the understanding the project can bring to it.